Israel’s gas is finally flowing, and you can make money off it
3 January 2020

Of the ten investments that I featured last year, nine went up, and just one went down. Over the past three trading days, that one black sheep finally started to turn and soared 20%. There is an opportunity waiting for you, if you haven't grabbed it already!

Open just about any newspaper today, and you'll read about the historic agreement between Israel, Cyprus, and Greece. The three Mediterranean countries intend to invest the princely sum of EUR 6bn (USD 6.7bn) to build the "EastMed" subsea pipeline. The 2,000 km / 1,243 mi. pipeline will stretch from Israel's mega size offshore gas field to Italy. At a later stage, extensions to other European countries are planned.

Once it's finished, the new pipeline is supposed to deliver 10% of the EU's gas needs.

That's excellent news for the EU, but even greater news for Israel.

By planning the EastMed pipeline, the comparatively small country has just secured a way to monetise the gargantuan gas reserves that were discovered off its shores.

For Undervalued-Shares.com Members, none of this is surprising.

I had long informed them about all this in an in-depth report, which also named the no. 1 company that will benefit financially from all this. [1]

Back in spring 2019, I had gone to great lengths to analyse the prospects of a little-known, USD 2bn company listed on the Tel Aviv Stock Exchange. It's relatively easy to access for investors outside of Israel because its stock also trades as ADR on the US market as well as on the German OTC market.

As I informed my Members back then:

All of that made for a tantalising story, but the investment did not work out at first.

The stock rose 20% initially but then fell back significantly. At one time, it was down 40% compared to the prevailing price at the time my report was released. It was a painful misassessment. My timing was simply off, and the cheap stock got cheaper still.

The stock is back on track.

Had I fallen into the age-old trap of becoming too enamoured with an exotic investment story from a small, sunny country?

In my defence, Israel certainly had a lot of hard facts going for it, as my report spelt out to the surprise of many of my Members.

A place to be invested in for the next ten years

It's not widely appreciated, but Israel is one juggernaut of a fast-growing economy. If you want to achieve capital gains on the back of the proverbial rising tide that lifts all boats, Israel is definitely a country to look at.

In my report, I published a list of "130 surprising things I learned about Israel while travelling and researching the country on the ground".

Here are just a few of them:

4. In the last 20 years, Israel's economy has grown at a faster rate than any other significant country of the developed world. During this period, its population grew by 50%, but its economy grew by 140%.

16. Israel came through the 2008 crisis without having to bail out a single financial institution

27. Because of its geographic location and the situation with its neighbours, Israel cannot launch satellites eastwards, like physics and the earth rotation would demand. This challenge led to Israel developing light-weight satellites, which then became a thriving industry in their own right.

68. Despite the threats and hostility surrounding it, Israel is ranked #11 in the World Happiness Report 2017.

93. According to Bloomberg, Israel is the world's #4 for having the best health system.

94. According to the Agency for Cancer Research, Israel ranks 1st in the world for cancer survival rates.

115. Israel recycles more than 90% of its wastewater; compared to 12% in California. Its wastewater, once treated, is drinkable and ranks 10/10. However, it's only used for irrigation. The world's #2 for sewage water treatment, Singapore, recycles just 35% of its sewage water.

You get the idea…

Indeed, my interest in this particular company was also driven by Israel's remarkable track record as an economy that had risen (literally) out of desert sand and now ranks among the world's most modern, high-tech economies. I wanted to find one investment that could act as a proxy for betting on the country's continued economic success. Ideally, I wanted that to be a low-maintenance investment that could simply be put away for many years to come. After all, my website is primarily about finding long-term investments that private investors can easily add to their portfolio to build their wealth over time.

A growing economy tends to grow its energy consumption at twice the rate of its GDP growth. Add to it the fact that Israel's government has enacted a strategy to replace all fossil fuel energy sources with gas. It didn't take much to figure out that gas from Israel's own gas fields was going to be selling well.

The stock market thought otherwise - at least until a few days ago. 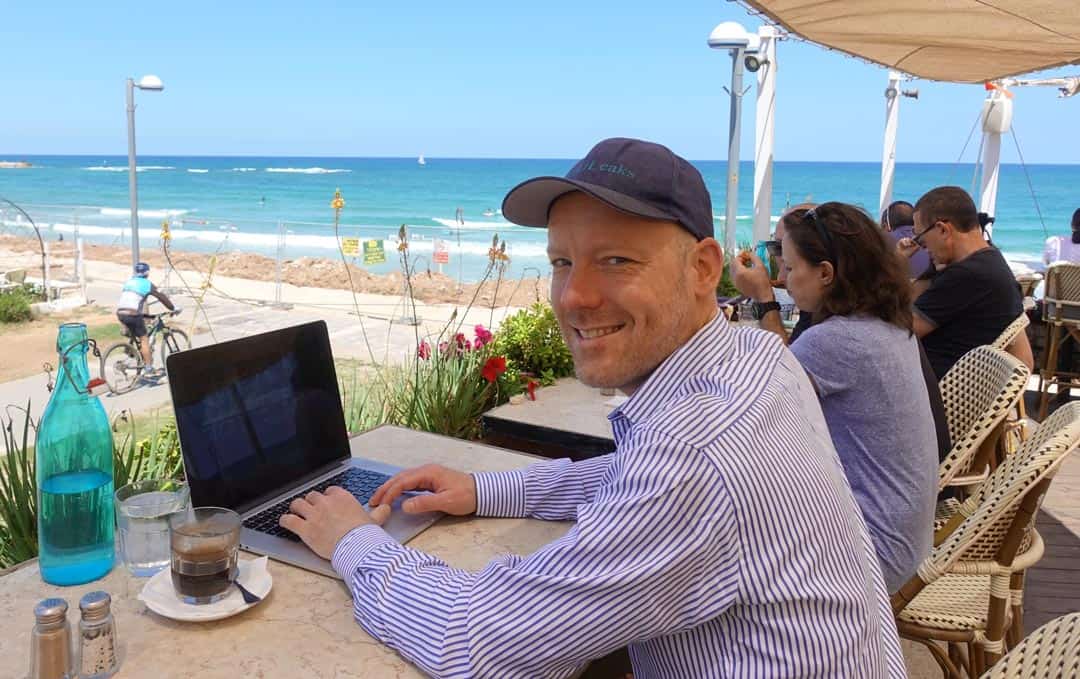 Yours truly, hard at work carrying out research on the beach of Tel Aviv.

Most of what I predicted in my report last year in terms of upcoming developments actually turned out to be spot on:

The reasons for the stock's temporary dive last year were fairly simple:

All of these issues eventually evaporated into thin air:

What's more, the company has just replaced its CEO. The previous CEO had been a formidable executive who served the firm well during his three-decade long tenure. However, for the process of listing in London, giving the company a younger face was going to be a good move. The major shareholder appointed one of his trusted confidants to become CEO, after a multi-year apprenticeship as Co-CEO of the company. Such internal promotions have a much higher success rate than an external hiring.

With all that done, the stock rallied, and the black sheep of last year's investment reports is almost back to an even keel.

What's in it for you, though? 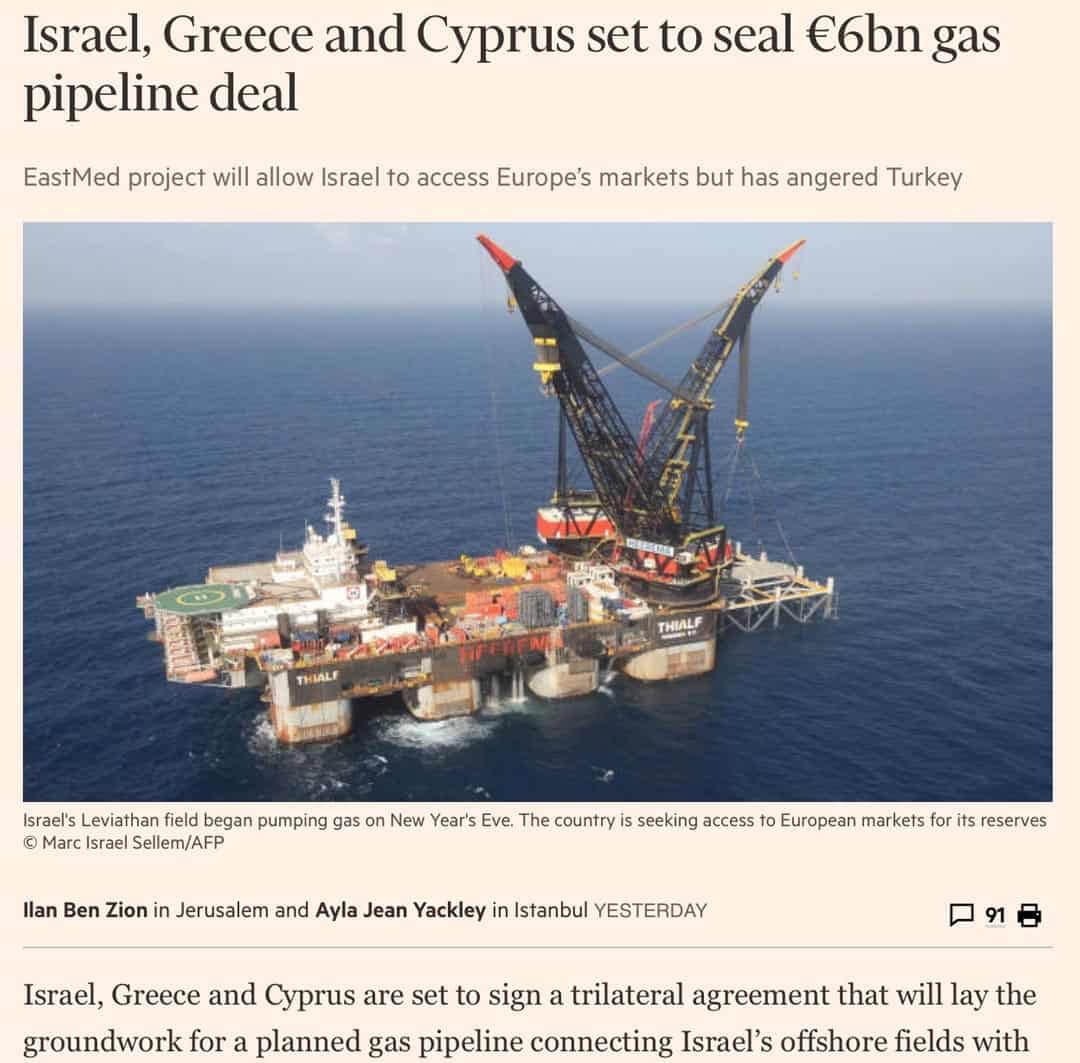 The story has started to hit the mainstream media [2].

It's a great time to get in

As I had told the Members of my website in several updates that followed the original report, the stock has the prospect to become an investment that serves you well throughout the entire 2020s:

The entire investment case of Israel's gas reserves is still at its beginning, and the stock's fundamentals are even better now than they were a year ago. The stock is cheap, and the media as well as the investor community have finally started to take notice of developments in the Israeli energy sector.

The stock price will not keep pacing ahead at the speed of this week, but it's likely going to go up further over the coming months and years. All the more so once the IPO in London takes place.

My 104-page Israeli Gas Report from April 2019 [1] remains one of the single most extensive pieces of background information you can find about the changes in Israel's energy sector. It's worth getting the report out again, to get your head around the unique circumstances and opportunities that this company is now dealing with.

I will also be publishing an "official" update about this company soon, which Members of the website will receive as part of their routine delivery of new content and updates.

Did you find this article useful and enjoyable? If you want to read my next articles right when they come out, please sign up to my email list [3].