Sifting through the Woodford rubble – can we make money off his misery?
14 June 2019

Britain's highest-profile fund manager, Neil Woodford, has been in a spot of bother recently.

The biggest fund managed by his eponymous firm had USD 13bn in client assets as recently as 2014, but asset outflows had reduced that number to just USD 5bn at the end of May 2019. Then, an avalanche of fund redemptions hit his firm because of ever-growing concerns about his performance (or rather lack thereof). Woodford had to close his largest fund to redemptions, effectively locking in his investors for an undetermined period.

Investors were, rightly, upset. The media, the regulator, and even a Parliamentary commission are now all breathing down Woodford's neck. I doubt the easily recognisable Woodford is currently showing his face in public all that much.

If you live in Britain or read the British media, you'll have heard all about this already. Last week's Sunday Times even dedicated an entire section to Woodford's woes. Not surprising, given that Woodford is the closest thing that Britain has ever had to its very own Warren Buffett.

For anyone living elsewhere, this story is less likely to have appeared on their radar screen. And why should they care? In the grander scheme of things – some USD 80,000bn are managed by fund managers worldwide – this is just a drop in the ocean. Famous fund managers regularly end up falling from grace.

I haven't got a single pound invested in Woodford's funds, and I don't think anyone else will want to invest either, in light of the current circumstances. Given the lemming nature of the finance industry, his fund management company is probably done for and could well be wound up, or he'll turn it into his family office. If some of his funds survive, they will probably end up under new management and change their name. It's likely game over for Woodford Investment Management.

However, that's not to say there wouldn't be money to be made of all this, somehow.

Are British stocks cheaper than at any time since WWII?

The fund management industry is a bitch.

When things are going well, you are celebrated for your ingenuity. When it's not going well, then nothing you have ever achieved in the past will do you any good. You'll be a fool and yesterday's man. The media will be onto you with their usual Schadenfreude.

Woodford had an extraordinarily good run when he worked at INVESCO, the fund management giant. Between 1988 and 2013, he managed up to USD 30bn and his outperformance of the markets made him a household name in Britain. He was, in particular, famous for holding on to investments for an average of 15 years.

He certainly didn't have any luck recently, and the UK stock market has mostly been flat since 2015. Also, Woodford simply made various real errors in judgment. During his INVESCO days, everything he touched went well. Over the past two years, it seemed that the opposite was the case. It recently became a running joke that if Woodford is invested, a company is guaranteed to fail.

Is it likely, though, that he lost his entire talent overnight?

Woodford, whom I've never met or communicated with even though he once invested USD 30m in a fund that I was a director of, has been in equity investing for over 30 years. He will have accumulated vast knowledge about the universe of publicly listed British equities, and he is very experienced in judging a company's valuation and prospects. A few years of bad performance will not have changed that.

That's why I still listen when he gets quoted in the media:

"Every asset in the portfolio has a fundamental value that significantly exceeds its share price; in my judgment, the gap between value and price is as wide as I have ever seen in more than 30 years of public equity market investing."

This will sound like mere self-defence, but I have actually seen such assessments elsewhere already, from credible sources.

"On some measures, the UK stock market is at its lowest valuation for 30 years."

Elsewhere, I read a statement from Simon Elliott, an analyst at Winterflood Securities:

"It is difficult to avoid the conclusion that the UK is cheap at present. … London stocks are trading 30% below global peers on a variety of valuation measures, close to a 30-year low."

In amidst widespread Brexit hysteria and Woodford's undoubted errors in judgment about some companies that badly underperformed, there is one inarguable fact. British companies are currently cheap by most measures. The low exchange rate of the pound sterling makes them even less expensive for foreign investors.

With this in mind, I have started to sift through Woodford's favourite investments among British Blue Chips. Which companies did he buy into that he thought were cheap at the time, and which ones have lost more value since?

Obviously, a company's fundamentals could have changed for the worse. In which case, Woodford simply bet on the wrong horse, and the loss in value is justified.

However, in other cases, a cheap share may have simply gotten even cheaper. If Woodford thought a stock was cheap and it then fell 20%, 30% or 50% after he bought it – maybe it's simply even more of a screaming buy now? These things do happen.

When others are busy doing the fashionable thing of Woodford-bashing, I am busying myself going through his funds' portfolios. I want to locate the British shares that are now an even better investment than at any other time during the past decade (or even, decades).

If Woodford's funds are forced sellers of these securities right now, then there might be a short window of opportunity to buy into these companies at fire-sale prices.

Cheap valuations, fire-sales… This is usually the stuff a contrarian investor's dreams are made of, right?

Keep an eye on Lady Britannia's stock market – and its exchange rate!

Woodford's current set of problems was a useful call to action to make me spend more time analysing British equities.

Over the past few months, I have received an average of about two or three enquiries per month from foreign friends, asking me if now wasn't a good time to invest in London property: "The pound is so low, it'd be really cheap for us to buy now. Do you think we should look at this in more detail?" 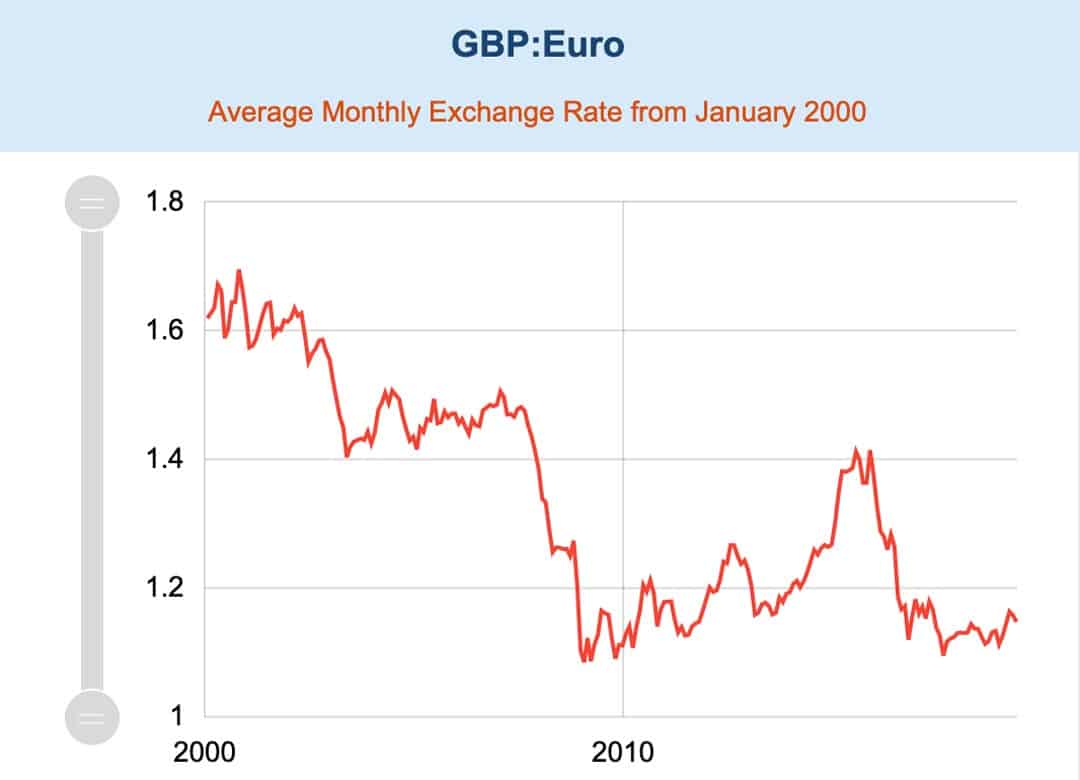 A multi-decade opportunity to get into the pound at a rock-bottom exchange rate? 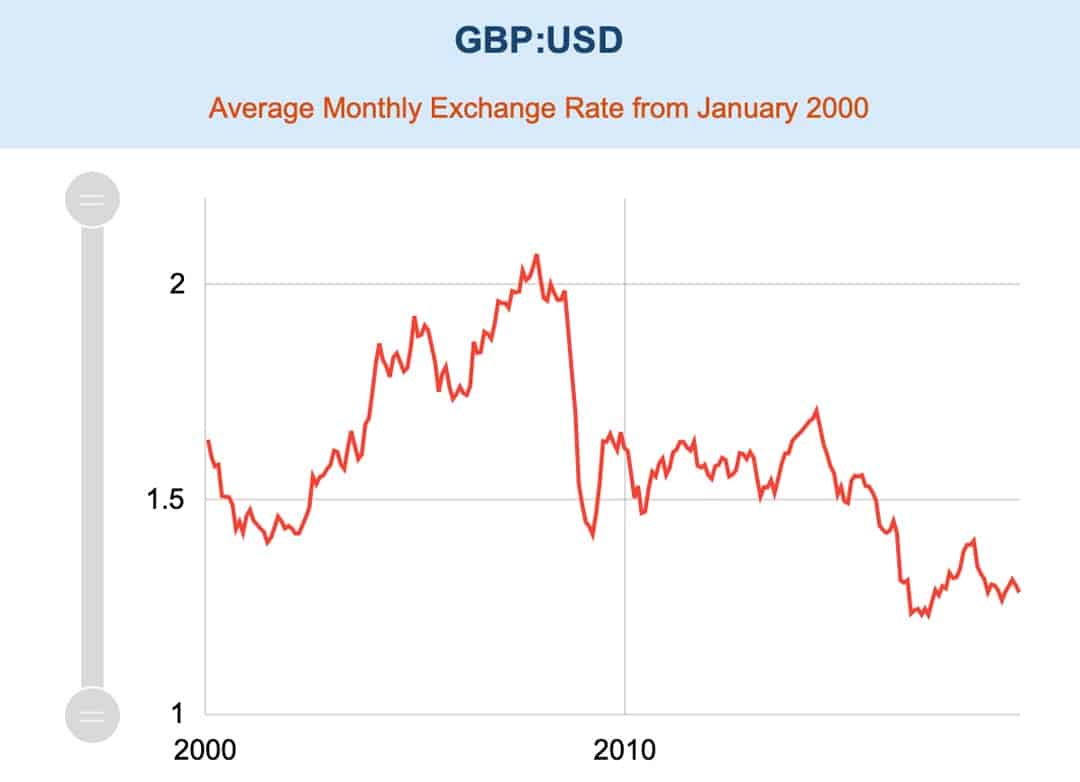 Holders of US dollars, too, can currently get into the pound sterling at record-low prices.

The pound's bombed-out exchange rate isn't an advantage that Brits will have available to them. But for the 99% of the world population that don't keep their savings in pound sterling, the low exchange rate is indeed another tantalising factor in considering British equities.

Based on the Big Mac Index, the pound is currently 27% undervalued compared to the US dollar. This is but one indicator for its value, and there are all sorts of reasons for the pound's current exchange rate. However, it doesn't take a Ph.D. economist to figure out that the pound is currently quite simply cheap in terms of purchasing power. Just go to Oxford Street or Bond Street and watch bargain-hunting tourists from Continental Europe load up on electronics and luxury goods. Britain is currently one of Western Europe's bargain shopping destinations. (There'll also be lots of Asians, but their hoarding-style shopping is also partially driven by tax reasons.)

Based on the Economist's Big Mac Index, the pound is cheap as chips (no pun intended).

With all this in mind, it's worth asking:

These are questions I am currently spending a lot of time investigating.

Buy when others sell

Woodford's portfolio of bombed-out stocks has given me a nice head start for investigating these questions. Until he closed his main fund for redemptions, he published the list of ALL holdings. There are plenty of candidates to look into.

No doubt, my age and having experienced several major bull and bear markets during my investment career plays into this.

E.g., I am old enough to vividly remember the 1999 cover story of Barron's, the leading US investment weekly, asking: "What's wrong, Warren?"

At the time, Warren Buffett of Berkshire Hathaway had just experienced the second worst year of the investment career he had started in 1965. Barron's wondered if he "had lost his magic touch", and many investors considered him "passé".

Obviously, Warren hadn't actually lost his talent for spotting bargains, nor had the eternal supremacy of value investing changed. This was a temporary aberration. Berkshire Hathaway A shares were trading at USD 54,000 back then, and they are now trading at well above USD 300,000. Buying a dollar for 50 cents is an investment style that will never go out of fashion, at least not permanently.

Buying bargains makes sense in the real world when you are looking at electronics, luxury goods, or even Big Macs. It will also always make sense when it comes to investments, although fewer people have any experience with that (or dare to go against popular opinions).

That's what you've got Undervalued-Shares.com for.

In my in-depth research reports, I cover investments that are out of favour, cheap, and likely to get your superior long-term returns (as well as the occasional short-term winner [1]).

With this in mind, I see Woodford's woes as an opportunity to behold. His problems are probably the clearest-yet sign that British equities are worth looking at because of their low valuation.

My research is still ongoing, but it's clear already that he does have some real gems in his portfolio. About one or two of those, Members of my website might very well end up reading more in the future.

Watch this space, for upcoming in-depth reporting about investment bargains "Made in Britain".

Did you find this article useful and enjoyable? If you want to read my next articles right when they come out, please sign up to my email list [2].

P.S.: Check out my latest in-depth report [5] about an investment opportunity you won’t get to read about elsewhere (yet!). Available for Members only so sign up now [6] to get immediate access.