The sun is always shining somewhere – for your investments, too!
21 June 2019

If you like sunshine and warmer climes, it'll feel natural to you to travel to whatever corner of the world where that can currently be found. At least for those of us who can afford it and have a degree of freedom, behaving a bit like migratory birds to follow the warmer seasons as they shift around the world has become quite natural.

The same cannot be said about investing.

For most people who are saving and investing money, there is still a substantial degree of home country bias. Those people buy stocks in their country of residence, considering everything else as "too risky" or "too exotic".

At the most, they might buy a "global" investment fund of some sort. That is the right thing to do in many ways. However, a global fund will simultaneously be invested in areas that are on the up as well as areas that are on the way down. It's a bit like booking a two-week holiday, where you spend a week on a sunny beach and then counter it with a week in a cold, dreary place on the other side of the planet.

Why not be very ambitious and try to always be at the best (sunny) spot? Here is a recent example of how this could work for you.

In early January, whilst travelling in Argentina and Uruguay, I dedicated one of my free Weekly Dispatches to MercadoLibre (NASDAQ:MELI), the South American equivalent of Amazon (Nasdaq:AMZN).

Here is how the two respective shares have performed since:

These two companies are literally copycats of each other. One serves the US and many other parts of the globe, the other one covers Latin America. The business model is precisely the same.

What isn't the same is the following:

While the sun has recently been shining onto the share of MercadoLibre (more on this in a second), a couple of dark clouds have been hanging over the shares of Amazon (e.g. possible anti-trust action by the US government). That's why one outperformed the other by a factor of 10!

Need I say more to convince you that looking at specific opportunities around the world is a worthwhile exercise?

Any comparison of companies and stocks is always a comparison of apples and pears. You could poke holes in my description, or add additional aspects. But the overall point I am trying to make is clear, and it's a valid one. 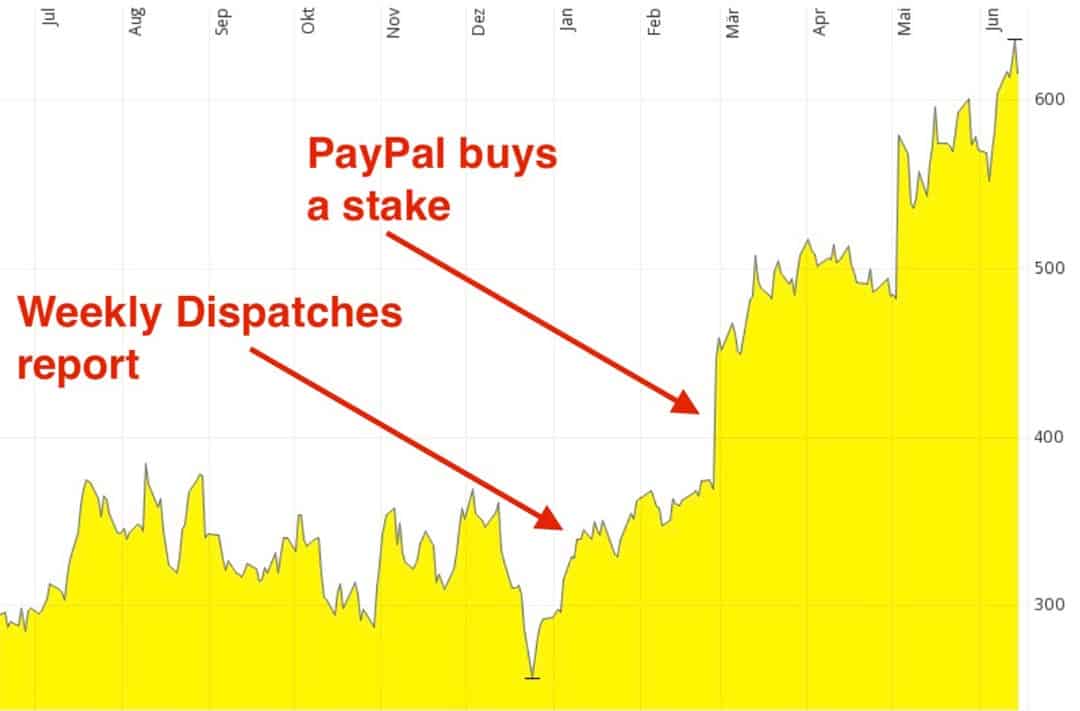 Interest from a large US-American company led to the share making considerable gains in March 2019.

Will there be a bid eventually?

At the time, I didn't want to feature MercadoLibre in one of my more extensive research reports.

As I put it back then, I considered the stock more as a "bet" than an "undervalued investment", which is why it didn't really fit my investment profile. But it was an interesting story to point out, and as I wrote at the time, a variety of factors could lead to the share moving up regardless of its already high valuation.

One of these factors was a potential bid from Amazon, Walmart, or Chinese companies, such as Alibaba.

No outright bid has materialised yet, but PayPal (Nasdaq:PYPL), the American payments giant, made a USD 750m investment in MercadoLibre. That's what triggered the massive jump in the share price in March, and no doubt contributed further to its ongoing rise. PayPal's investment provided more credibility to the thesis that one day, a foreign player keen on entering the Latin American market will launch a full bid.

The valuation of the company is now truly sky-high – quite literally, off the charts! If the company misses a few of its ambitious plans, the share could drop very significantly. As I wrote back then, I prefer investments where I sense a minimal downside combined with significant upside. It's my style to focus on this kind of situation, and I will continue to be true to it.

While I am looking for such exceptional situations (and they ARE hard to find), I come across all sorts of other opportunities. Some of my readers will be interested in hearing about them, too, for any number of reasons. It's in my Weekly Dispatches that I point out, describe and explain ideas that I found interesting enough to look at, but which in the end didn't fit the very narrow focus and the very high hurdles that I have set for the selection of my 10 best investment ideas per year [1] – which are the 10 or so in-depth reports that I send to my Members over the course of the year.

Another "sun shining elsewhere" opportunity for my Members

Speaking of all this, I am delighted to let you know about a recent new trend among the Members of my website.

A few short months ago, I featured an Israeli gas company in the report section that is exclusive to Members. It's a share you are unlikely to have read about anywhere else yet, and I have probably produced the most extensive piece of research that exists about this company.

I am not mentioning its name publicly because the company has a market cap of only USD 2bn, and the investor who controls the majority of the company is putting millions into buying up more shares. I'd rather keep this exclusive for my Members than have hanger-on types bid up the price.

Anyway, it was entirely predictable that this particular company wasn't going to be met with the greatest of interests at the time of publication:

Because of the nearly 30 years I have spent writing about investments, I do have a pretty good sense which stories are likely to generate immediate interest, and which ones won't.

I actually told two colleagues at the time: "The Israel story is one that people will ignore at first. But they'll all come back to it once the share has jumped 50% one day, and then regret not having paid attention earlier. It's always the same thing."

Pretty much the same thing had been the case with Gazprom when I published that report in late December 2018:

Gazprom is up 60% since it recently jumped literally overnight, and I have had record numbers of new people sign up to my website lately because they NOW want to download the Gazprom report.

In the meantime, I have been telling those Members that I happened to have email conversations with, to pay attention to the Israeli gas story: "It's where Gazprom was half a year ago. Total no-brainer because of its ridiculously low valuation. Might take a bit of time to wake up and will seem dull in the meantime. But when it does, it'll go up massively overnight."

To my great delight, a whole bunch of people I am in touch with did follow my advice recently. I have received feedback such as:

(All taken from actual reader emails, some of which I had to translate into English.)

I've said it before, and I don't want to the risk of sounding like a broken record.

However, given how those who did end up wrapping their mind around the Israel gas opportunity have reacted, I decided to launch another alert to everyone else.

If you haven't read this report yet, it's the one I'd really like to point everyone to right now:

The Israeli gas story is likely going to be another case of:

It's quite a simple pattern, but one that has proven to work out nicely time and again.

On that note, I promise not to mention the under-appreciated Israel gas story again in these Weekly Dispatches… for at least a month or two!

Did you find this article useful and enjoyable? If you want to read my next articles right when they come out, please sign up to my email list [4].

P.S.: Check out my latest in-depth report [7] about an investment opportunity you won’t get to read about elsewhere (yet!). Available for Members only so sign up now [8] to get immediate access.