Riches from ruins (part 3): Bougainville Copper, or the treasure island that won’t go away

Riches from ruins (part 3): Bougainville Copper, or the treasure island that won’t go away
13 March 2020

When I look back at some of my older work, I am overcome with a mixture of pride and horror. Bougainville Copper (ISIN PG0008526520), an Australian company with activities in Papua New Guinea, ranks top among them.

In 2004 and 2008, respectively, I published two extensive reports about the company. These reports were, I humbly say, pretty epic for their time in terms of making hard-to-find information available to the public and providing in-depth analysis. Ever since, my name has been intricately linked to Bougainville Copper. As a German investor told me last year: "I still have a hardcopy version of these reports on my shelf!"

Equally, it's an investment that has produced more frustration and disappointment than anyone could have ever imagined. 16 years on, the company remains dormant and inactive. The stock had risen tenfold at one point and temporarily became worth AUD 1bn (USD 600m), but it's now back to where it was when I first reported about it. 16 years and 0% return. Though in the meantime, it's been extremely volatile, and on several occasions, short-term traders were able to reap major gains from the stock's wild swings. 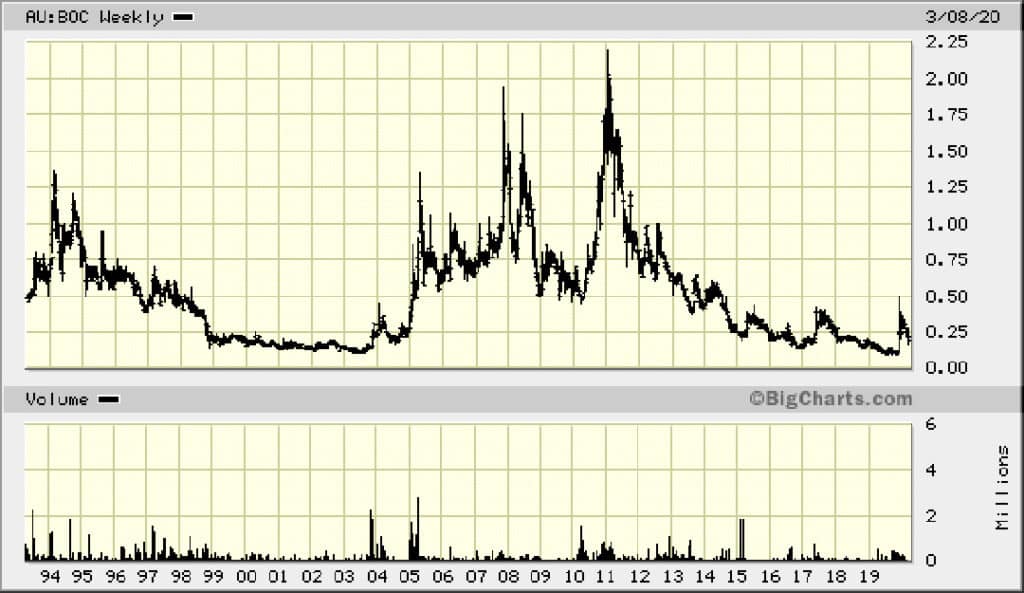 I don't think there is any comparable company listed on a stock market anywhere. Bougainville Copper is a unique animal, which explains why several generations of investors have been fascinated by it.

By popular demand, here is an update based on the manifold recent developments.

The exotic island of superlatives

Bougainville is an island the size of Corsica, located in the Southern Pacific and forming part of Papua New Guinea. 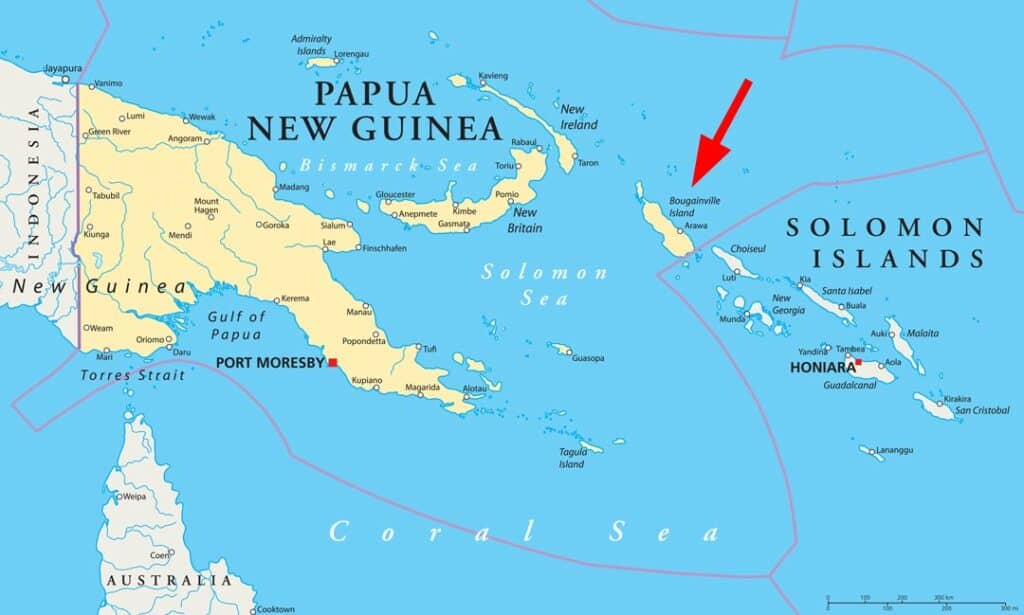 Bougainville is located on the western edge of Papua New Guinea.

During the 1960s, a large copper deposit was discovered in the mountainous interior of the island. The Australian mining giant, Rio Tinto, invested record amounts to start operating a combined copper and gold mine in 1972. During its operation, the mine produced an annual average of 175,000 tonnes of copper and 18 tonnes of gold.

One can't overstate how many superlatives the mine created, e.g.:

Looking back at it from today's perspective, there were also a few record-breaking negatives:

In 1989, a local foreman and his co-conspirators stole 50 kilograms of dynamite from the mine's operation, which they used to blow up an electric pylon. Subsequent events spiralled out of control and led to a full-blown civil war. The mine stopped operating and the stock price gradually fell by over 90% over the coming five years, as hopes waned that the mine would ever be reopened.

For 31 years (and running), the Bougainville Copper stock has been a bet that the company would one day restart its operation in Bougainville. Peace negotiations, spikes in the copper price, and recurring media interest have all done their part in regularly causing a stock price rally.

Until now, however, the mine has remained closed and the rallies all proved temporary.

Two decades of delay and decay

In 2001, the key parties of the conflict agreed the following:

These parameters were the primary reasons for my 2004 analysis of the company. Everything seemed wonderfully logical and straightforward:

Little did I know of tropical island politics.

Peace was restored quite quickly. Skirmishes, road blocks and no-go zones near the mine persisted for many years, but the 2001 peace accord did bring the main conflict to an end. That was the easy part.

All subsequent steps were hamstrung by difficulties.

Even something as comparatively simple as holding a referendum among the island's 234,000 residents took an incredible 19 years to organise. Serious efforts to hold such a referendum did not get underway until 2017, while the actual referendum took place in 2019, just short of the 2020 deadline.

Given the ongoing uncertainty over the island's future governance model, nothing meaningful happened in the meantime. Bougainville's economy has most recently been based on fishing, agriculture, and (illegal) small-scale mining. The island's GDP is a mere USD 1,100 per head, and even holding the referendum required funding support from abroad.

Precious little has changed in Bougainville since 2001, and in some aspects the island has even fallen back further.

What did happen, though, was an effective pulling-out of Rio Tinto. The company that created the mine and tried to revive it for 27 years has effectively cut its ties with Bougainville – for now.

Bougainville Copper now has competitors – but it's still unique

When the mine was created, Rio Tinto decided to operate it under the helm of a separately listed company. Following its IPO, Bougainville Copper was publicly listed on the Australian Stock Exchange and majority-owned by Rio Tinto.

During the entire conflict and its aftermath, Rio Tinto declared that it was ready to negotiate financing and other terms for reopening the mine. During this entire period, the Australian mining giant took a lot of flak for its ongoing involvement in the Panguna mine. Besides ongoing bad PR, there were lawsuits, too.

The company gifted 36.4% of the share capital of Bougainville Copper to the national government of Papua New Guinea, and an identical 36.4% to the residents of Bougainville. This reduced Rio Tinto's stake to zero.

Depending on who you ask, there are two different versions why this gift was made. Some say that Rio Tinto had had enough and wanted to draw a line under the entire matter. Others viewed it as a cunning political move to eventually get back into Panguna after all.

From 2010 onwards, other mining operators have started to develop an interest in the dormant Panguna mine and other exploration prospects on Bougainville. At last count, there were at least six parties with a serious interest in Bougainville:

That's besides Bougainville Copper itself, which still lays a claim to the dormant mine and affiliated exploration rights. The authorities of Bougainville revoked the company's rights in 2015 and they have been the subject of a lawsuit ever since.

Depending on who you ask, you'll get diametrically opposed views about Bougainville Copper's chances for getting back into Bougainville.

Some say that Bougainville Copper is the least likely candidate to win a mandate for reopening the mine, given its role in the island's history.

Others argue that the opposite will be true:

Will the island's residents eventually realise that working with Rio Tinto represents the best option after all? Rio Tinto could easily regain a significant stake in Bougainville Copper by agreeing to an equity investment, which the company requires one way or another. It's better to be asked in than to try and force your way in.

If I had been involved in all this, I would have also gifted these shares to local players: "Call us if you need help. Else, good luck to you!"

Based on the recent development of the stock price, it seems that the market is taking a fairly similar view. Bougainville Copper may yet receive such a phone call.

The dormant company is back in play

When the first serious noises about a referendum emerged in 2017, the stock price temporarily rallied 150%.

It subsequently fell to a new all-time low during summer 2019. At a price of then AUD 0.09, it had lost 98% compared to its 1988 high of AUD 4.50. There was significant selling pressure at the time and you could have loaded up decent numbers of shares had you been daring enough to buy.

It would have been a good time to buy indeed.

In December 2019, the stock price shot up by 400% in the matter of just a few days. The referendum was held without too much trouble, and 98% of Bougainvilleans favoured independence.

The referendum's result spurred speculators back into action. Once more, the prospect of reopening the mine was making it into the financial media.

The market has been there before, though. Do investors realise just how complicated the entire situation has become in the meantime?

Cool-headed, conservative observers of the entire matter will claim that anyone investing in Bougainville Copper shares must be borderline insane and delusional.

There is a long list of reasons NOT to invest:

Bougainville is not even an emerging market, it's more of a near-medieval society with a bit of foreign-aid money sprinkled across it.

On the other hand, there is also a case for revisiting some of points of contention, many of which don't hold water once inspected more closely:

If viewed from a rational perspective, the course of action should still be clear: negotiate the reopening of the mine in a collaboration between Bougainville Copper, Rio Tinto, the island residents and the government of Papua New Guinea. If the simple solution cannot be made to work, it's doubtful anything else will ever play out to the favour of the Bougainvilleans. In Bougainville, even simple is difficult enough.

But the same could have been said in 2004 already.

My own life experience, too, has made me more sceptical. Having spent four years living in the Galapagos Islands where I rescued the island's largest private employer from an existential crisis, I have gained my own set of insights into island politics, island conflicts, and island irrationality. These experiences took place in a comparatively developed country (Ecuador), in a jurisdiction that has had its own special legislation since 1998, and where international support is comparatively plentiful. I dare not imagine how much harder an operating environment Papua New Guinea and Bougainville would be.

With that in mind, count me among the sceptics, at least as far as actually reopening the mine is concerned. I have learned my lessons in this regard.

None of which is to say that I wouldn't expect another few rounds of speculation and volatility. When I finished this article, the Bougainville Copper stock price rallied 23% in an otherwise weak market. There is life left in them old bones. 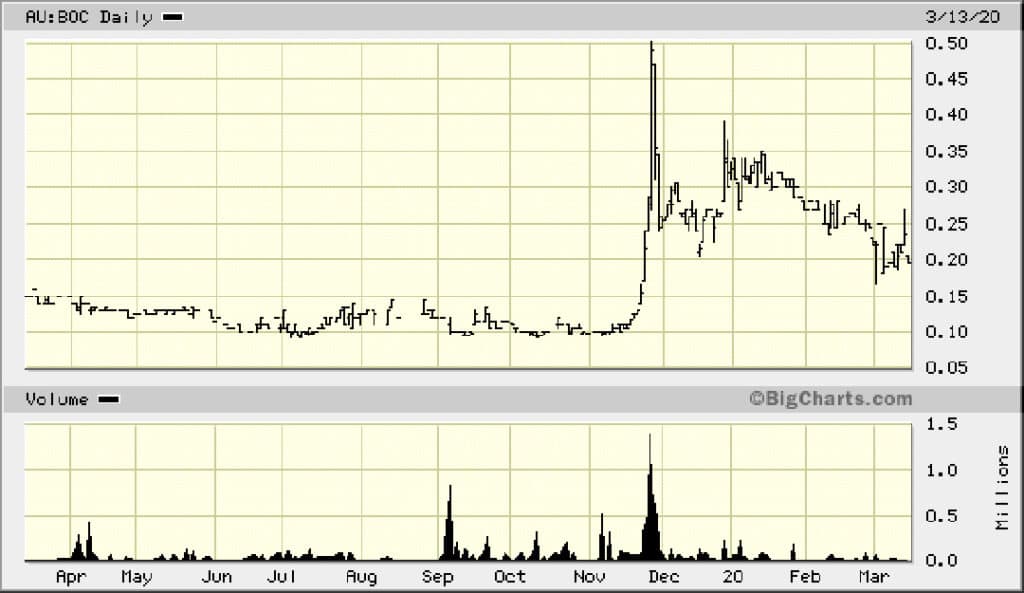 The referendum provided a shot in the arm of Bougainville Copper shareholders.

As far as its recurring hopes for a revival are concerned, Bougainville Copper will probably continue to deliver.

In December 2019 and January 2020, Bougainville Copper had major write-ups in the Financial Times, Forbes, Bloomberg, Reuters, NPR, the Sydney Morning Herald, and a variety of specialty publications such as The Diplomat and Mining.com (these links all go to specific articles). It's no surprise that the stock price went into overdrive mode. Check back on my description of the media-driven "hype machine", which I published as part of last week's dispatch.

The best-working formula for Bougainville Copper has so far been: buy when things look absolutely hopeless and depressing, and sell whenever you see the usual raft of mainstream media players reporting about the story.

Trading at AUD 0.20 right now, the stock has come back significantly since its December 2019 run-up, but it's still far off its summer 2019 lows. It's probably worth checking back in 6, 12 or 24 months to check if the price has come down again to a level that suggests total, utter hopelessness. When that's the case, it might be worth picking them up as another punt. Until then, I'd stay on the sidelines.

10 reasons to hold Gazprom stock for the next 10 years