The newspapers are overflowing with commentary about Italy's financial situation, and it's hard to stay on top of the fast-moving subject.

The pundits are stopping short of predicting that Italy will run out of pasta, but besides that, it all sounds like the end is nigh for the Bel Paese.

Frankly, none of this is new. These reports have surfaced, in one form or another, for the better part of the last ten years.

Each time it appeared like Europe's 4th largest economy was hitting a crisis point, some new political fix for the financial problem was dreamt up, and everyone went back to slurping espressos and pursuing business as usual.

I'd not usually have the ambition to add yet further to the existing ocean of printers ink already expended on this subject. There are plenty of people who know much more about this than I do.

However, a recent conversation with an Italian friend of mine piqued my attention and spurred me on to start my own research.

Two sides to the story

The Italian situation is complicated, and things are never quite as straightforward as they seem on the outside.

E.g., it would seem evident that Italy has gotten itself into such a tight financial situation, that no one would be surprised if some form of debt crisis arose:

These are scary figures and relationships, and they don't entice to invest in Italy.

Then again, what's printed in economic research papers and in the world's big newspapers is already priced in by markets. However scary these numbers are, they have been like that for a long time and so far, none of the doomsday scenarios has materialized.

E.g., you could even make the case that relatively speaking, Italian banking shares are cheap. By some measures, they are. Case in point, another friend of mine, the CEO of a large Italian bank, reportedly put EUR 2m of his own money into his employer's shares. I haven't asked him yet about his views. But the actual amount of cold, hard cash from personal savings put into a subscription of newly issued shares is a noteworthy call from someone who sits on the inside of all this.

So who is wrong and who is right?

Just where the tipping point lies for these competing viewpoints, I have no way of saying. There is no clear verdict what will happen, and when.

However, it IS possible to make a reasonably accurate call about the current pricing for certain financial instruments that allow you to benefit from a potential default. There is an intriguing investment opportunity to be found in amidst Italy's debt situation!

You won't see me joining the obsessed doomsayers who predict that there is absolute certainty that Italy will topple over financially.

I do have a personal opinion on where Italy - along with the rest of the EU - is going. But that's just based on a combination of gut feeling, political preferences, and casual analysis. Ultimately, I am not smart enough to know whether Italy will go bust or not, and when. No one is.

However, one would have to be borderline delusional not to admit that the risk does exist. Italy could go bust, and that risk is anything but negligible. As a matter of fact, earlier this week, some financial instruments that offer insurance against such an event indicated that there is a 21% risk of Italy entering government default within the next five years.

The default risk indicated by these financial instruments is probably the most realistic, neutral assessment of the overall situation that you'll be able to find anywhere.

You'll understand the context and the relevance of this figure once I explain to you how Italy's situation has recently been changing. 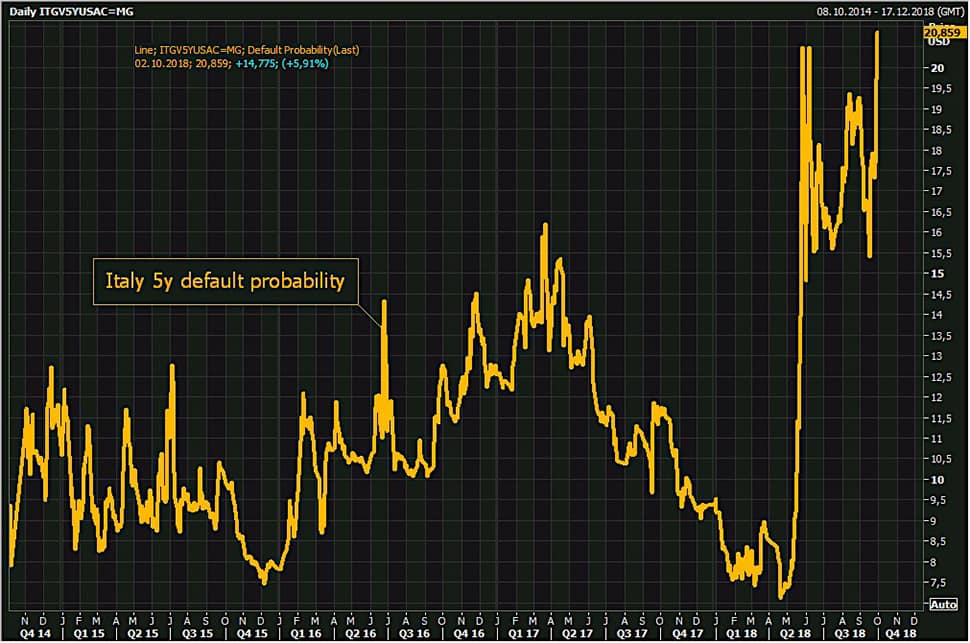 Default insurance contracts are the fever-curve of Italy's public finances

What could trigger a default event

Italy doesn't just have a lot of debt. It is now also facing up to the reality of a few technical issues that are making a default more likely than in the past:

Never mind the fact that Italian politics are now, on the whole, committed to being anti-Brussels, anti-establishment, anti-bankers. Italy's current politics are not exactly inspiring further support from abroad.

For Italy, losing the support of the ECB, for whatever reason or combination of reasons, is no laughing matter. Facing an increasing interest burden and having to deal with fickle foreign investors is only adding further pressure.

The country is now at risk of ending up in a debt trap from which it will find that this time, there is no escape.

High on lifestyle, low on fiscal discipline: Between 1970 and 1999 alone, the Italian Lira was devalued over 80% versus the German Mark.

Financial Ponzi schemes like the one Italy has built by way of building up unprecedented levels of government debt only continue... until they don't. Sort of like dictatorships. Eventually, something brings it all down.

You can only stretch an elastic band so far. Eventually, it rips.

Very few predicted when exactly the Soviet Union would come down. But down it came eventually. The subsequent political changes were chaotic and far-reaching.

Academics would call this the Dornbusch law:

The right strategy to benefit from Italy potentially blowing up

I spoke to my Italian friend to pick his brain about the investment related aspects of all this, not just because he is from the country but also because he has a sharp mind for all things financial.

He gave me the idea to look into shorting 5-10 year Italian debt (for the non-experts among you: shorting relates to financial instruments and mechanisms that let you benefit from falling prices).

I have to do a lot more research before I am able to present a thorough investment case and the best possible instruments to play this theme. However, having done a quick drive-by evaluation of the opportunity, it's not difficult to imagine that shorting Italy's public debt could yield 20 times your money if the country does indeed default.

There are a lot of technical aspects related to this potential investment. E.g., you'll have to find shorts with the right conditions (for the experts among you: "deep out of the money" and with a strike price that is maybe at 60 cents on the dollar). There are a variety of ways how to play this, depending on which part of the world you are in, what financial institutions you have access to, how much or how little money you can invest. How exactly to play this investment theme is a complicated subject matter.

However, that's details for another time.

What's important is that the market for this particular trade is currently mispriced. Relatively speaking, the prices for these default-related investments are low compared to the (rising) risk of Italy actually going bust.

It's from this sort of mispricing that you can make money.

It's not an investment I have researched in sufficient detail yet to write an in-depth report about. 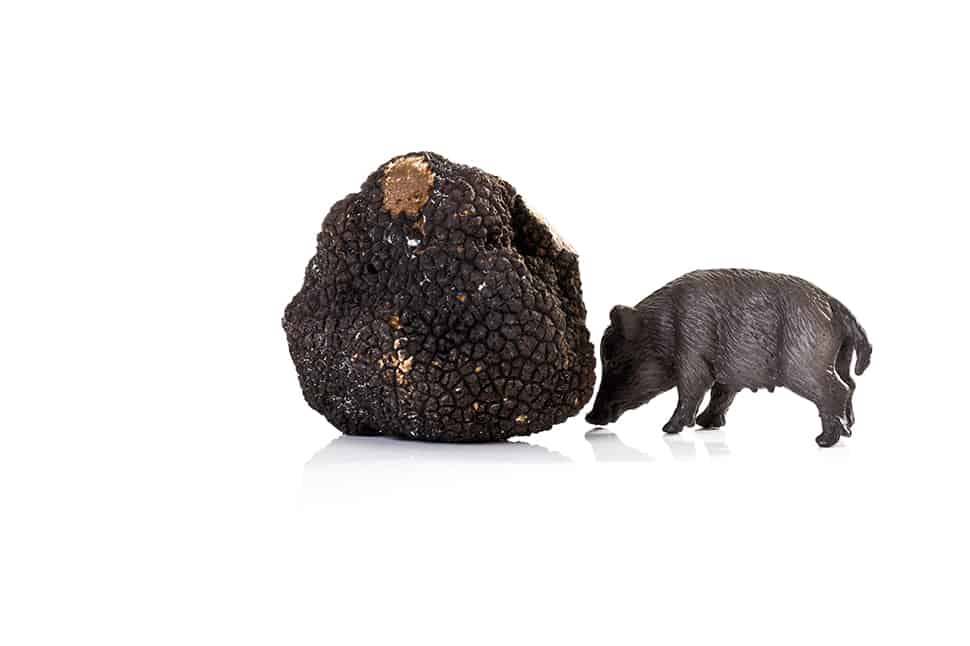 I am even a bit nervous about putting out this initial note. There is a good chance that I'll get a few flaming emails from Italy-bulls who will tell me that I've got this all wrong. As I said above, there are definitely two sides to this Italian debt affair. Also, the latest news this week was that Italy once more turned the corner and avoided disaster. A few political agreements fixed it, and now the subject is likely to quieten down again: "Espresso, per favore! And just add it to my monthly bill, which I will then roll over into all my other outstanding monthly bills. Grazie molto!"

My gut feeling though is that now is the time to dig deeper into this subject and to focus not on the "if" but on the relative pricing of various financial instruments. There is a high level of complexity in all this, which actually often helps to find bargains because complexity means other market participants easily overlook it.

I'd even welcome reader feedback on why I may be totally wrong with my initial assumptions, or which instruments others may already be using to bet on the same idea.

This is not a trade where to invest the savings of widows and orphans. Though if my theory of serious mispricing is correct, it could be one of the potentially most lucrative investment opportunities you can currently find in Europe. The sort of trade that allows you to upgrade your Fiat into a Ferrari.

Following 20 years of economic crisis, Italy could very well be just one small mini-crisis away from major disaster.

Eventually, the camel's back breaks.

Former taboo subjects such as Italy potentially introducing a parallel currency are already out in the open. This would have been inconceivable just a few years ago.

It's clear to me that if or when this crisis unfolds, it'll do so in a way that is unlike anything we have seen before; at least in our lifetime.

It could even be that it ultimately gets triggered by a relatively small, insignificant event. It could get kicked off by the proverbial butterfly that starts a hurricane by the bat of its wings.

These are dangerous times for anyone who has invested money in Europe. If Italy folds, the rest of the Continent (and the world) is going to be affected in all sorts of ways.

However, as always when the sh** hits the proverbial fan, someone is going to make a lot of money from it all.

How can YOU make a buck out of all this? Watch this space…