Why US banks are safer than their European counterparts 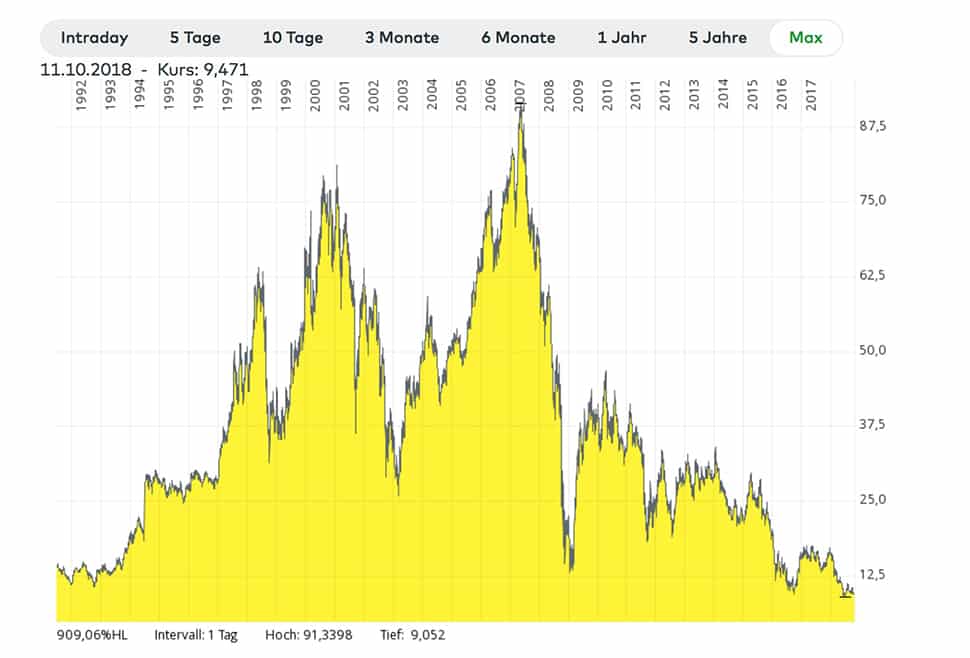 Deutsche Bank long-term share price: Everything you need to know about Eurozone banks distilled down to one single chart

Indeed, there are some cultural factors that make the US a vastly superior economy compared to the Eurozone.

Case in point, the performance and relative safety of US banks.

A big crash, but then…

We all remember the fall of Lehman Brothers.

There is no question about it, the biggest banking crisis of the past 70 years did start in the US.

However, the US economy has a character trait that sets it apart from much of Western Europe.

When America has a problem, it puts on its gloves, gets out its tools, and fixes it.

In Europe, the opposite is more often than not the case. Ugly problems get swept under the carpet. Europeans kick the can down the road and hope that somehow, over time, the problem will solve itself (or become someone else’s responsibility).

Because of these cultural differences, one could witness some remarkable difference in the post-crisis performance of US banks versus Eurozone banks.

During the past five years, US bank shares rose 70%.

In Europe, bank shares only rose 25%.

Recent research by Bain and others has clearly shown that the Eurozone to this day has a bigger problem with risky banks than the US. Put bluntly, relatively more Eurozone banks are at risk of failure than US banks.

On the other side of the Atlantic, the post-financial crisis mess is mostly (with exceptions) dealt with. In Europe, it's still a work in progress, to put it mildly. That's TEN years later!

The US had some spectacular blow-ups among banks, and the country led the world into the biggest banking crisis of living memory.

Equally, and not surprisingly, the US once again succeeded in leaving a crisis behind much faster than everyone else and producing outstanding relative returns compared to the culturally entirely different Eurozone countries.

How will the next crisis play out?

I recently asked a German contact with broad reach into the German banking industry what he thought of the risk of Deutsche Bank potentially going under.

It’s not an outrageous question to ask.

Since its 2007 peak, Deutsche Bank shares have lost 90%. What’s more, instead of eventually recovering from its crisis, it's recently been sliding down even further. If you believe that share prices have relevance in indicating a bank’s future prospects, then that’s something to worry about.

My contact’s reply: “No one knows. It’s impossible to say what risks they may or may not carry on their balance sheet. We simply stay well clear of that bank and its share.”

The overall market seems to have a similar view. Based on Deutsche Bank’s share price performance, it appears that few people put much faith in the inability of Eurozone banking leaders to fix their broken institutions.

This has relevance for the future, and anyone holding bank shares or bank accounts should heed these warning signs.

When the next storm hits - and we may already be experiencing the first tails - it could be much more catastrophic for European bank shareholders than for investors in US banks.

US banks will have another downturn but after that experience another (quick) recovery.

For some Eurozone banks, however, it will be the end of the road. If I had to take a bet, I'd say the next Lehman Brothers will come out of the Eurozone. Possibly even, from Deutschland.