When the Mighty fall – and how not to fall with them

One of the benefits of age is that there truly is nothing new under the sky.

Seeing a star performer company characterized in the following way is a recurring theme in each bull market:

“Unique business model.”
“Brilliant CEO.”
“Premium valuation because of strong growth.”
“The most valuable ever.”
“This time, it’s different.”

Another recurring theme is their eventual crashing back to earth.

Even at the relatively tender age of 43, I have seen it several times over.

When General Electric was what the “FAANGs” are today

Members of my generation will vividly remember when General Electric (GE) was “the world’s best company.”

Its CEO, Jack Welch, was on the cover page of every other business publication, celebrated as “the master” by Fortune magazine. His “Six Sigma” management method was taught at universities. GE was renowned for having built a “unique business model” based on acquiring ever new businesses and adding them to a sprawling conglomerate.

During the 20 years from 1980 to 2000, its shares price rose by a factor of 70. With $600bn market valuation, it had become the world’s most valuable private company at the time. Relative to the size of the US economy back then, GE was even bigger than what Amazon and Apple have achieved, despite their market value of over $1,000bn each. 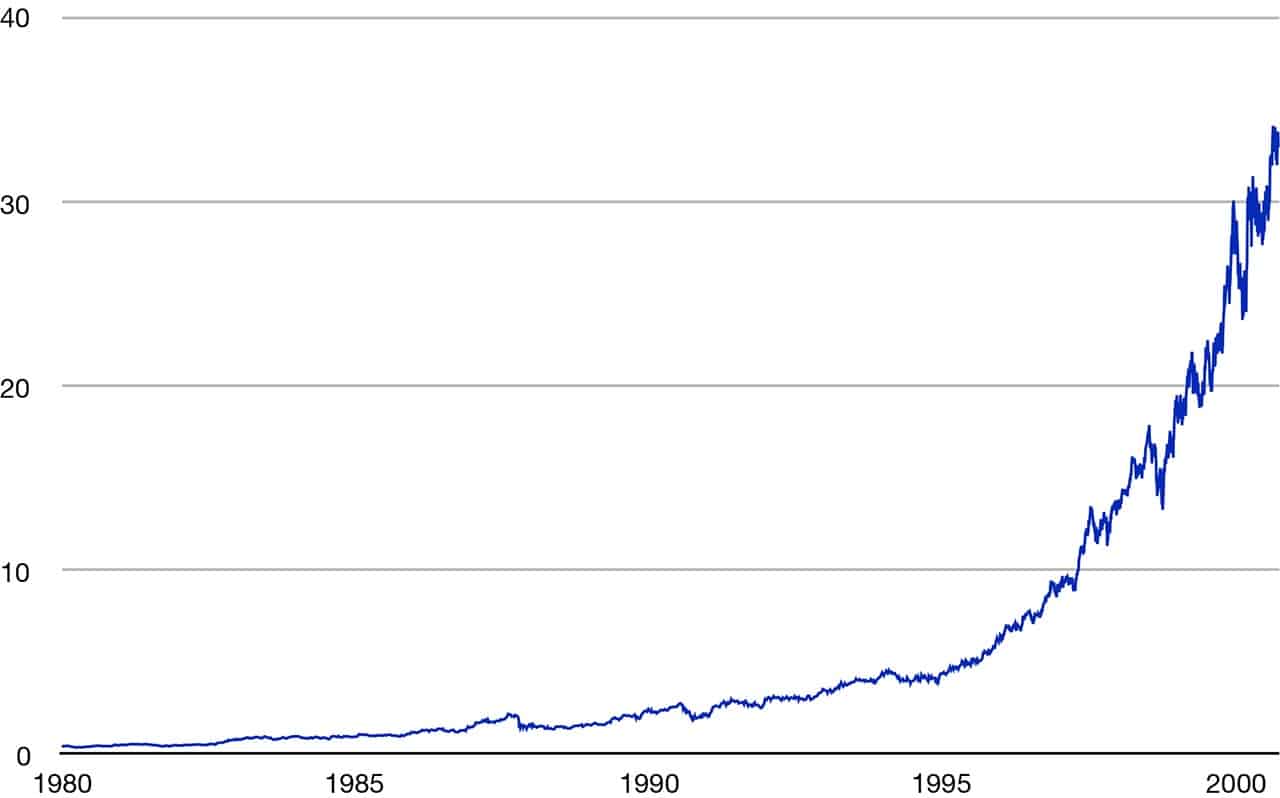 In 1999, Jack Welch was even voted “Manager of the Century.”

Not surprisingly, GE shares were an obligatory part of every long-term portfolio. Its share price was a continuously rising curve, screaming at investors: “This will just continue like that forever!” At a $600bn market value, you can imagine how many investors had parked significant amounts of money in GE shares. It did seem like a safe bet!

How the wheels came off

In retrospective, what were seemingly safe, permanent reasons for GE’s success proved to be not so safe and not so permanent after all.

Even after its fall, GE is still a $100bn company. But you’ll be hard-pressed to find long-term shareholders that have made money off GE shares. Its share is now down 80% since 2000, and it’s currently trading as low as it last was during the 2008/09 financial crisis.

It seemed like such a solid investment back in the days. Now it’s a case-study for buying at the top and being forever stuck in a downwards spiral.

Not so great since the tide turned

I am not a doom-monger, and I am actually a fan of some of the FAANG companies that are the current darlings of the market.

Facebook - I am on there every day and love communicating with my friends.

Amazon - whereas it’s not my favorite place to shop because I hate what’s happening to high streets everywhere, sometimes I do use and I appreciate their service.

Apple - my laptop of choice.

Netflix - the only reason I am not a subscriber is that if I were, I wouldn’t have any time left to write.

Google - besides using them, I even once pulled off a project with them and mightily enjoyed working with their team. What a fantastic company, product, and crew!

However, it could be their very popularity that will prove to be their eventual downfall as an investment. Many people who use their products are also using these companies to park their savings. FAANG share prices are now, on the whole, hugely inflated when you consider their valuation multiples and/or the assumptions required to justify investing in them. Not that many people nowadays would know what “valuation multiples” are. You simply invest because it’s Google, right?

My comparatively brief Weekly Dispatches aren’t the right place to dig deep into the valuations of each company, and few people want to hear about that anyway.

Just take it as my personal opinion after having done a lot of reading on these companies, and disagree with me if you like. The majority of the FAANGs (possibly even all of them) are vastly overvalued and are unlikely to be a terribly good investment over the next five or ten years.

How dare I doubt these companies? Here are just some of the reasons…

Apple? Nine out of ten Americans already have a cell phone.

Amazon? To achieve the same stock price performance that it has had over the past ten years, it would have to increase its market value to a figure that is equivalent to the GDP of the entire European Union.

Google? Its reaching into ever new businesses - best symbolized by its name change to Alphabet - very much reminds me of GE’s ambition to be everything to everyone.

None of which is to say they aren’t great companies with great products. Some of them may merely switch from being growth companies to being cash-cows. Maybe social media is the new tobacco, and Facebook shares will become a dividend play, just like it happened in the case of Philip Morris after tobacco shares became reclassed as a “sin investment.”

Because these long-term manias take a long time to screech to a halt, these companies’ bull-run may well continue further, possibly even a lot further.

It’ll continue, until, well, it doesn’t anymore. No one can accurately time these things.

The difference between value investors and growth investors

Investing in FAANG companies is trendy.

These are companies that invoke (mostly) positive connotations. Being a shareholder of these companies makes you feel good about yourself.

It also feels safe and good to be part of the in-crowd.

You can even switch on your TV to feel “I own part of that show!”

Who’d want to invest in companies that aren’t popular, and which may even be ugly ducklings or just overlooked?

There is a strong correlation between value investors being able to analyze investments purely on the basis of rational, financial aspects; and growth investors giving in to more fluffy, emotional aspects.

Personally, I have grown to believe that only hard numbers and attractive valuations should serve as the basis for investment decisions. Everything else only leads to pain and loss, eventually.

Insider selling is at its highest

You can’t ever lump all companies together, not even among the handful of companies that make up the FAANGs.

E.g., we currently even have the unusual situation of value investing uber-guru Warren Buffett having bought into Apple.

However, it’s hard to ignore insiders in growth sectors cashing out.

During September, insider sales in the US market reached the highest level in a decade.

The CEOs of publicly listed US companies have also been pumping a record $827bn into buying back shares of their own companies this year. That’s above the previous record set in 2007.

Could there be a correlation between CEOs deciding to use company funds to buy back shares, while simultaneously dumping the stocks they own personally?

For me, it’s value over hype

I came across GE in my current quest to find companies that are:

These will be one of the focus areas of my upcoming new research service at www.undervalued-shares.com, once this website is fully relaunched (watch this space!).

I have the benefit of having lived through quite a few downturns.

My first experience of the wheels coming off was the mini-crash of 1989. Since then, I have seen and lived through some of the biggest bubbles and deepest busts the stock market has experienced during anyone’s lifetime. Heck, I even remember what it feels like to have rising interest rates!

It’s fun watching these bubbles arise, and if you are well prepared, it’s even fun to live through sustained downturns, because that’s when you can lay the foundation for your next financial leap forward.

Is GE a buy? Probably not. It certainly didn’t scream “Buy” at me when I had an initial look at its valuation and its prospects. But it’s a useful case-study for a company that seemed safe, popular and unstoppable, but which turned out to destroy 80% of its value.

For at least some of the FAANGs - I’ll bet you a cookie - similar stories will be written in some years.