Significantly undervalued? The Eurotunnel – and what its share price says about Brexit

Significantly undervalued? The Eurotunnel – and what its share price says about Brexit
26 October 2018

All bricked up and no future prospects? This meme scared the living hell out of Eurotunnel shareholders.

If you believe the mainstream media and certain politicians, Brexit will bring medicine shortages, famine, and general disaster. However, investors in Eurotunnel – quite possibly one of the most “European” projects to have ever been undertaken – are currently fairly calm about it all.

That’s a change to when the Brexit vote first happened. Caught out by the surprise referendum result, shareholders of the company that owns and operates the Eurotunnel suffered a 27% loss in the days after 23 June 2016.

Eurotunnel shareholders even had to put up with a nasty meme about their company going viral on the Internet. It showed their tunnel all bricked up, and their precious locomotives unable to go about their business.

Since then, relative quiet has returned to the low-key company that, following a name change in 2017, is now trading as "Getlink Group SE".

Here is what it tells us about the likely course of Brexit, and whether you stand a chance to make some money off it.

The century-old dream of a sub-sea tunnel

Dreams of connecting the British Isles to the European continent by tunnel have reportedly been around since Roman times. The first realistic plans came into existence in 1802, when French mining engineer Albert Mathieu-Favier put forward a proposal for a bored two-level tunnel. He envisioned the top one, paved and lit by oil lamps, to be used by horse-drawn stagecoaches; the bottom one would be used for groundwater flows.

In 1880, an initial section of the tunnel was dug. However, technical difficulties, political fears about the potential military use of the tunnel, and budget considerations put an end to the project. The eventual advent of air traveling didn’t help the project either, nor did the subsequent two World Wars.

In 1955, the British government announced that it no longer opposed such a tunnel for any military reason. However, the vast technical difficulties of such an undertaking, the enormous budgetary requirements, and a variety of other political concerns held up the idea until the 1980s.

It was only in 1984/85 that the British and French governments agreed on the framework for a tunnel connecting the two countries. Whereas the French didn’t object to state funding for the project, Margaret Thatcher made it clear that only private investment capital was to be utilized.

It’s due to Thatcher’s concerns that we now have a publicly listed, private company that owns and operates the Eurotunnel. Getlink is the legal successor to Eurotunnel PLC and Eurotunnel SA, two British/French sister companies that were set up to raise the required funds and carry out the necessary work.

Little did shareholders and creditors realize what an absolute nightmare they were to get themselves into.

A European success, a financial catastrophe

When bad governance, over-optimistic projections, and political influencing come together, disaster usually strikes. In this case, it wiped out many billions of investors' money, including funds provided by British and French pensioners who wrongly believed this to be a safe proposition. Hundreds of thousands of private investors sunk money into the project.

The original investors of the Eurotunnel project lost around 99% of their investments.

Precise figures are a bit hard to come by. Early shareholders who subscribed to at least 1,000 shares received travel benefits which different shareholders made use of to varying degrees; the company went through two debt restructurings and a subsequent regrouping of all assets in a newly formed entity, and it’s further complicated by exchange rates and taxes. 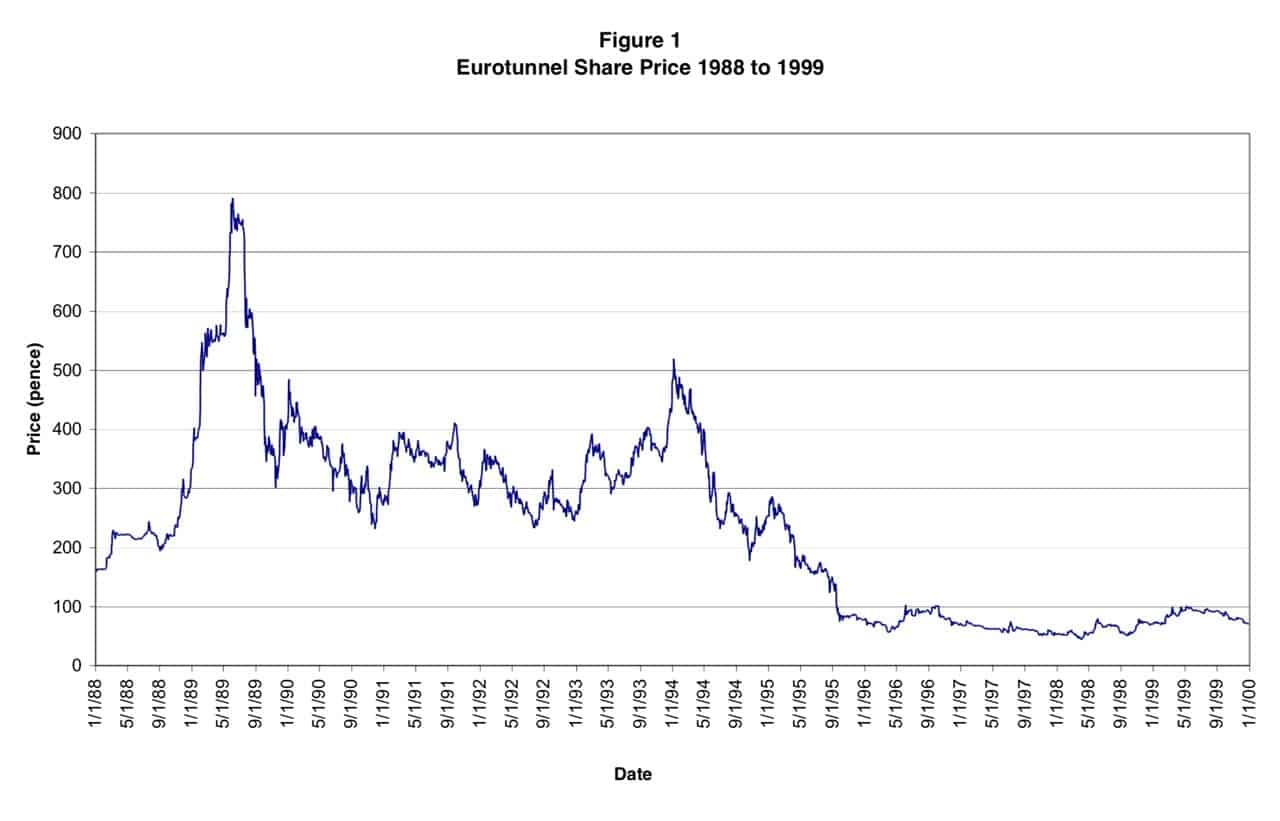 Shareholders didn’t come out well. It all started with the original IPO not getting enough interest and the share price dropping from the GBP 3.50 subscription price to just GBP 2.50 within hours of the listing on the London Stock Exchange..

A somewhat inexplicable Eurotunnel mania did temporarily drive up the price to GBP 7.99. However, by the end of the millennium, it had already fallen back to GBP 0.71; a remarkably disappointing performance during a time of otherwise buoyant share prices.

In subsequent reorganizations, shareholders lost their proverbial shirt. As is inevitable in such situations, equity owners get virtually wiped out when debt is renegotiated.

The performance was so bad that French shareholders at one point came together to oust the management. They even started to hold an annual dinner in Paris, handing out mock awards the shareholder who could prove to have bought the closest to the 1989 record price. The “Suckers Dinner” was born, or “Diner de Con.”

Where does Getlink stand today?

It’s been quiet since the 2007 debt reorganization and the subsequent reincarnation as Getlink. The company once made headlines in newspapers around the world, but in recent years has mostly disappeared off the radar screen.

It still fulfils what it was set up to do, i.e., operate:

If Brexit was likely to lead to chaos at borders or other forms of trade disruptions between the remaining EU states and Britain, surely this would have shown up in Getlink’s share price by now?

However, the Getlink share price is actually up 3% since the beginning of the year, compared to the FTSE 100 index having lost 9%. Getlink shares are now on the same level they were before the Brexit referendum. It seems like nothing has changed for the company, and current headlines about Brexit chaos aren’t affecting it at all.

Either the market has lost its function as a reasonably reliable indicator for the future, or it’s just not going to turn out as much ado as some make it out to be.

The management of Getlink will tell you: After 500 meetings with key decision-makers since the 2016 election, they believe that Eurotunnel will further grow after March 29th, 2019. In particular, they believe that trade between the UK and the rest of Europe will continue to grow, with a particularly strong demand for the fast, reliable freight link offered through the Eurotunnel.

So convinced are they of the UK and the EU essentially continuing with some form of business as usual, that they have carried on with another mega infrastructure project that is in the spirit of the original project. It will open up another line of income, and one that is based on better utilization of its existing main asset, i.e., the tunnel itself.

Growing electricity trade between the UK and the EU

Different EU countries have different prices for electricity, for reasons that range from the different ways of producing energy to logistical factors.

Increased integration of pan-European energy markets is one of the stated soft goals of the EU. This is aimed at not just reducing price differentials, but also to secure against energy supply disruptions in countries. When one country is lacking, another one can supply. Provided, of course, there are means to transport the energy.

Getlink has been advancing the ElecLink project, a 1000MW electricity cable to be laid through the Eurotunnel and with corresponding converter stations on both sides of the Channel.

It’s a project costing EUR580m and requiring nine years from planning to launch. Once in operation, it will be scheduled to operate for an initial 20 years. ElecLink is the largest project for carrying energy back and forth between the UK and France, and capable of carrying energy sufficient to power two million households.

It is now scheduled to go live in 2020, and due to its nature as an infrastructure project should contribute steadily to the company’s income.

Utilizing the existing tunnel for such a cable is clever. The company can easily put the cable into place and maintain it for a comparatively low cost, compared to potential competitors having to lay a cable through the sea.

In 2009, more than 20 years after the project’s launch, the company paid the first minuscule dividend. Since then, it has been making gradual progress with paying down debt and increasing the pay-out to equity holders. 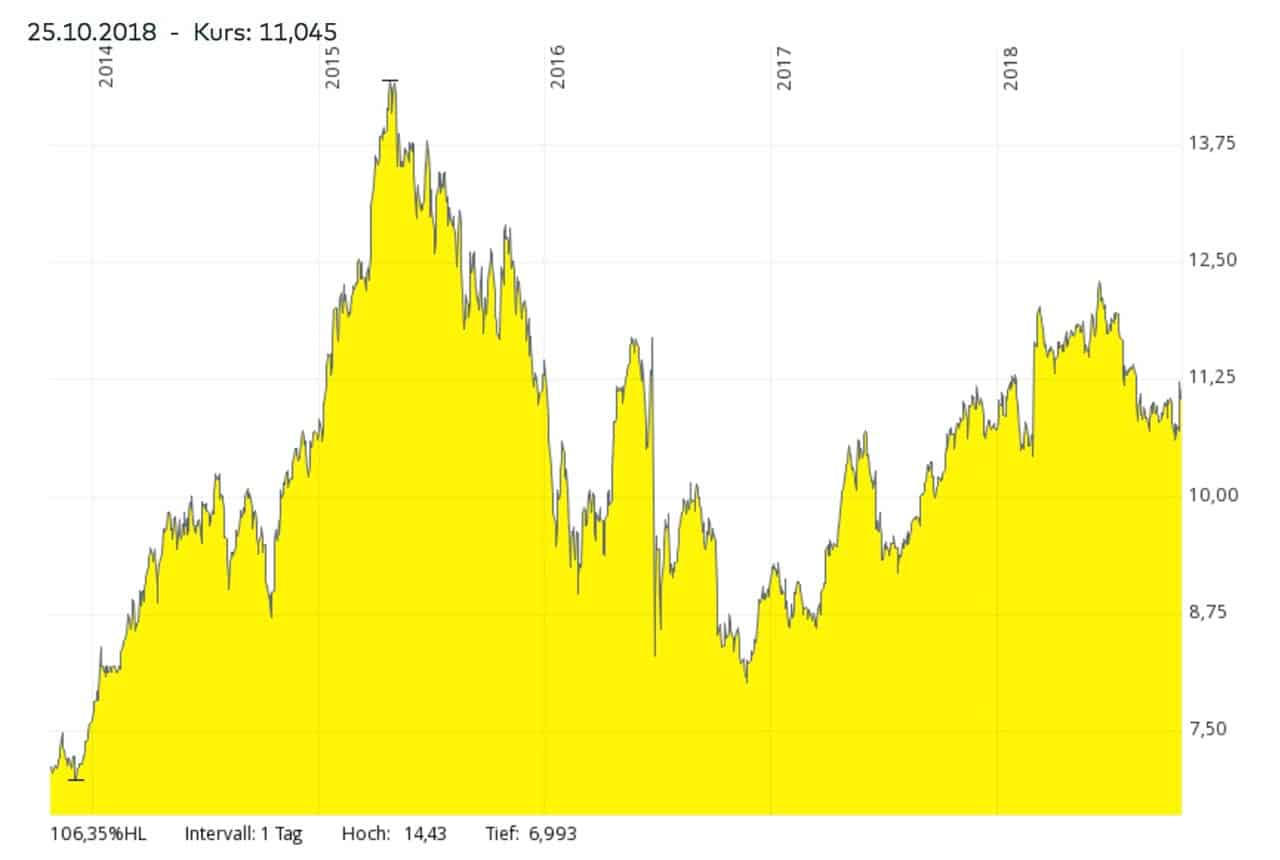 Growing freight volumes, the income from ElecLink from 2020 onwards, and continuously improving operating efficiencies are all a significant factor in the company’s plans.

If you take the company’s official publications as a basis, Brexit isn’t something that management currently expects to have any significant influence on the company’s performance. Neither does the market seem to care.

Seeing the tunnel bricked up isn’t what the market is currently anticipating.

Is Eurotunnel a worthwhile investment?

It turns out that there is a fair bit of hidden value in Getlink, provided you are into this kind of infrastructure investment. Especially because of a little-known twist that came out of the debt reorganization.

To support the debt restructuring, the French and British government extended the tunnel concession not once, but twice! Getlink is now clear to operate the tunnel until 2086. This is an unusually long concession period for an infrastructure project. Initially, it was only intended to last until 2042.

Relative to the length of the concession, and compared to other publicly listed infrastructure plays as well as M&A transactions where the valuation multiples became known, Getlink is currently “significantly undervalued.” At least, that’s what the management claims in its investor presentations, where it shows the comparative valuations of similar companies. I hazard a guess that hardly anyone even reads the company’s publications anymore. Getlink seems to get barely any attention from anyone anymore. That’s despite the company, without any doubt, operating a world-class infrastructure asset.

With rising dividends; additional income from ElecLink, and the likelihood of increasing freight volume in particular, there does seem to be long-term potential for the share.

I wouldn’t quite jump at it at current share prices. However, if there are some Brexit ripples after all or if world markets take a 2008-style dive, it could be worth keeping Getlink on your radar screen. Maybe it’ll dip significantly below EUR 10 for one reason or another. If or when it does, the share will be quite cheap, based on the currently available figures.

For the right price, buying into a fairly steady, growing income stream from an infrastructure project can make good sense for investors who are keen to safely stash money away without foregoing the chance to achieve capital gains.

With that in mind, it’s worth putting Getlink back onto the radar screen.

For everyone else, there is also the opportunity to make use of the company’s growing set of products. Besides its traditional railway links between London, Paris and Brussels, the Eurostar trains are now also traveling between London and Amsterdam. Further routes are supposed to follow. If anything, the company seems to be succeeding in providing us all with further traveling options in parts of Europe. Which isn’t an entirely bad end to the long saga this project has lived through!